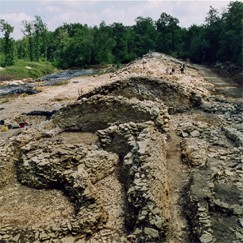 A Room to Dig

Some 6500 years ago on the Atlantic coast, our Neolithic ancestors buried some of their dead in impressive monuments known as tumuli. 12 years ago, archaeologists Roger Joussaume, Luc Laporte and Chris Scarre began to search extensively for one of them, The Péré. In 2002, Pierre Bonneau began filming the progression of their discovery of the burial chamber. This was an unexpected opportunity for archaeologists since it is more than 120 years since a dolmen burial mound had been found in France in such a good condition. The film follows the team through each methodical phase that marks a milestone in the knowledge of Neolithic burial rites.